can we play this with a ps4 controller?

A few things to say, I have downloaded it but have not gone far as the character select screen. I've seen (most) of your dev logs  and it is pretty epic.  (these are suggestions)

But i cant play with anyone, because there is (i'm pretty sure) no computers to play with. You should make computers and have difficultly levels.

And last, make different game modes like the one you have now, lets say "original" and another game mode stock where you have 1-6 lives and if you fall off you lose a life and there is no 30 sec countdown for the spikes to come out. (And make this customizable) But overall I really love this and I will play the full version.

Edit: I played with my brother, really fun!

You were just rude...

it was a joke, sorry though

how do i play

Great game, i really like this type of games, but unfortunatly i can't play it with my friends because of quarantine.

but i found 2 problems when checking this game alone.

first when i entered the game (as a keyboard and controller) played two games, exited to menu, checked how to play, and then went back to game start screen, player 1 window disappeard (look on the picture belowe) i had to restart the game.

second, game lacks one key feature, or atleast idk how to activate it, you should be able to play few games in a row without exiting to menu after match ends, matches are too short for that, maybe implement a round system, in which you can set amount of rounds to play, and the winner will be one who won most of the rounds?(i know it's a demo, and i understand you may have more important things to do) 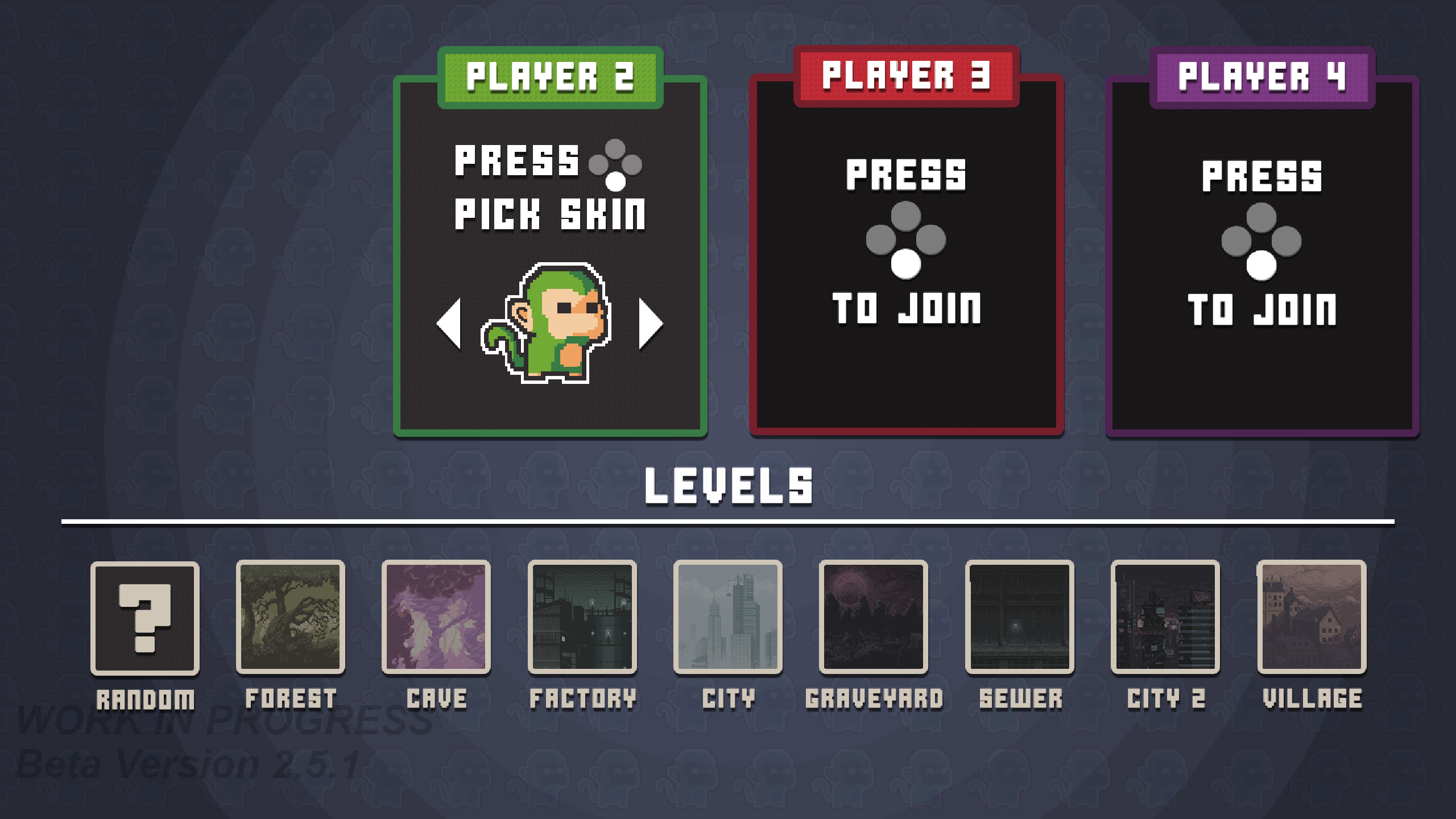 Very beautiful game!  But some arrows on the keyboard do not work for me, and therefore it was not very convenient for me to play, could you make a function to change the controls in the game?

that new beta update is going to be my bday

I found a bug where the screen freezes!It happened 2 times! 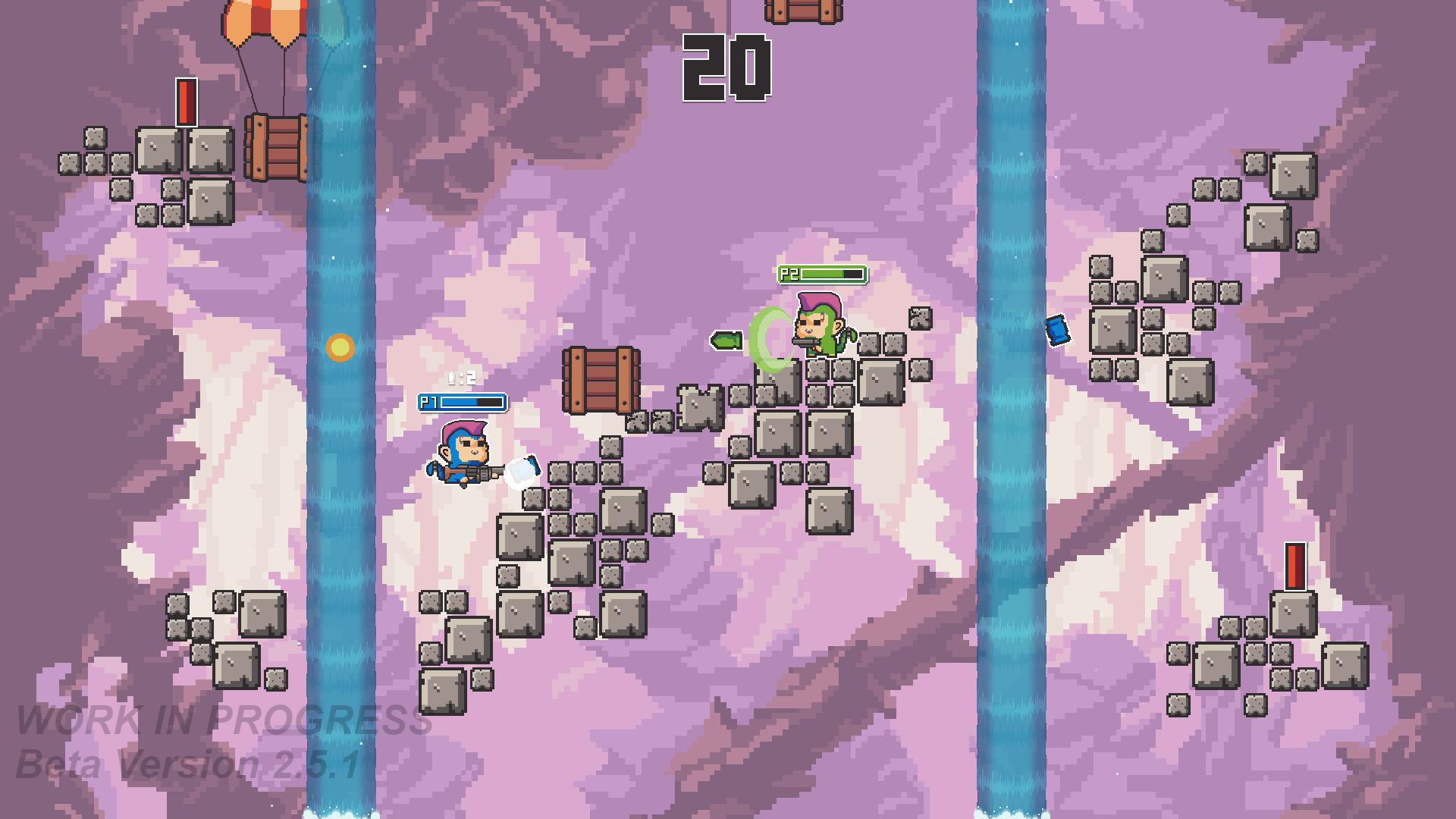 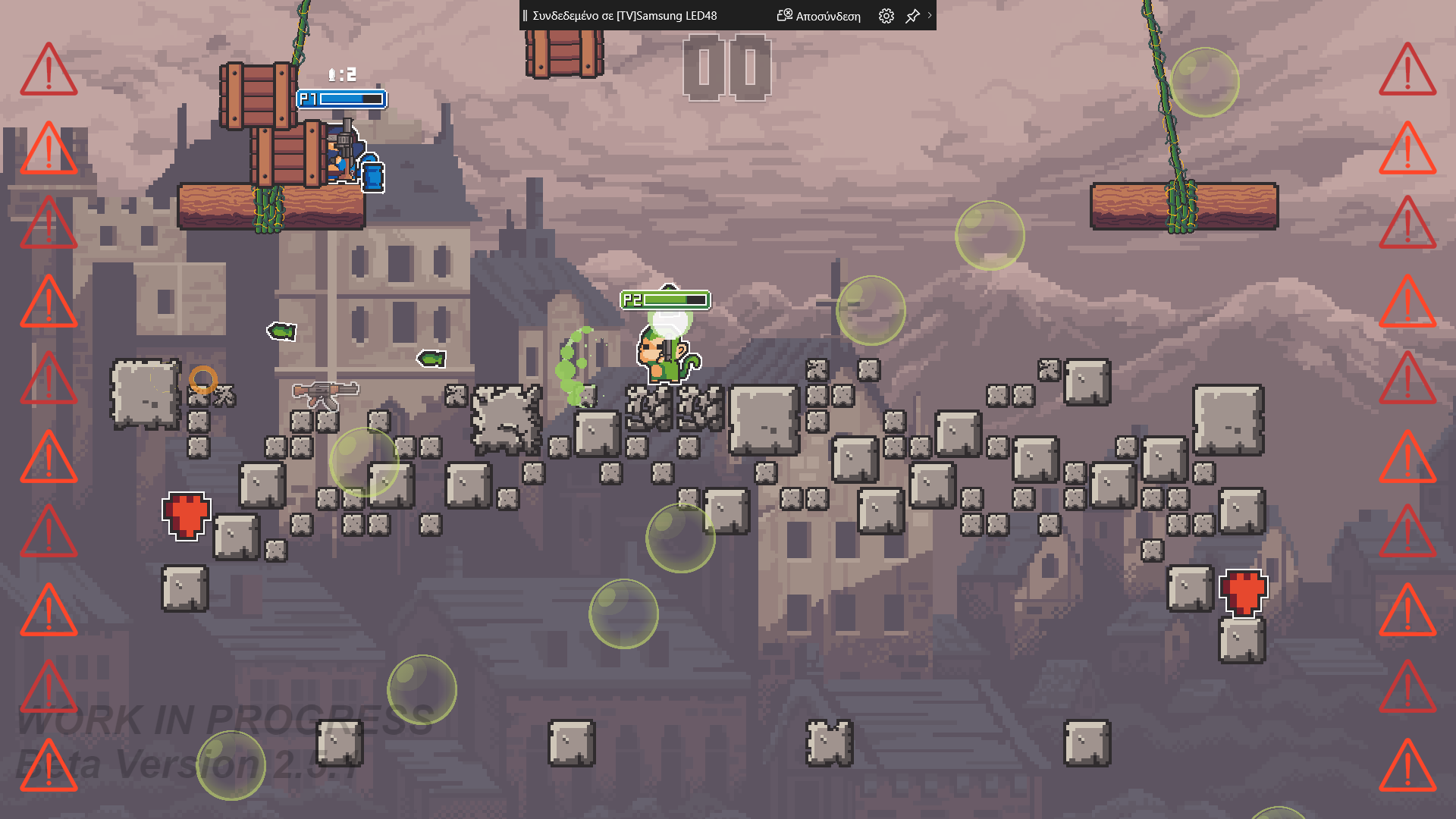 Wheres the executable to start it? I'm on Linux.

I think it's the file called "nw". Sorry I haven't really looked at the Linux build much, I don't have a machine that runs it. I didn't know if renaming anything would cause issues.

The file "nw" isn't an executable it's a shared library.

Love the game! I was able to play the game with 3 of my other friends during lunch and it was hilarious! We did found some bugs were, sometimes the double jump never activated. Either way awesome game and keep it up!

There is an occasional issue with the double jump that I will address in a future build. Thank you so much for playing and letting me know!

I get to play or watch other people playing this game at least once a month and it's always a great time.  Keep working on it, dude!

Great game! Did you build it with Construct3 or did you use another game engine?

Thank you very much. Yep, it's Construct 3.

Cool, that's what I suspected! Would be interesting if you could share how you manage the squeezing monkey effect.

He's Done A Video About It On His YouTube Channel: Vimlark

Hello, this game looks really nice, congrats! I played it with my daughter, we had fun! :) Look, I am new on itch.io, I am not sure if this is the place to write my impressions so let me know if I it´s not, please!

I played a lot of Towerfall with my daughters and this frenetic battle is really nice, I have some suggestion though:

- Environment platform layout - The way the environment is right now, I found difficult to create effective strategies to kill my enemy. I fall more often then I was expecting - so did my enemies - which made it more difficult for me to kill them

- Hearts - Those hearts :) it takes so much time to kill someone that when someone gets the heart, it feels almost unfair.  In Towerfall, since you die with one hit, the chests (which sometimes have the shield that count as an extra life) can be kind of a trap. I used it many times to kill the greedy enemies, whereas in your game, the cost of going for the heart pays off, unless you are almost dying.

In the end, those are some minor GD adjustments/tests, that´s my opinion, I am looking forward to play the next release!

Thank you for the comment and I'm glad you had fun with your daughter. I play a lot with my daughter as well (forced tester lol).

Unlike Towerfall, MWG isn't really about effectively killing your opponent. It's about being the last monkey alive. The two games have a similar feel but the goals are a bit different to me.

The hearts giving a lot of health and dying to the spikes more often is actually intentional. Through a lot of demoing/testing I have found that rounds that end before the spikes are a bit underwhelming for most players. I'm going for more of a party game that anyone can have a chance of winning, not just the player with the most skill at these types of games.

That is the reason for the short timer and excess health. The winner is the player that can survive the 30 sec free for all and maneuver themselves well enough to not be killed by the spikes/other players during "sudden death".

I will say the new update that will be coming soon really makes the movement more important as the monkeys can bump into and jump off of each other. That may help with being able to force opponents in different directions.

I really appreciate you taking the time to play and to go even further to leave a well thought out comment. Thank you again and I hope you enjoy future updates!

Sorry for the late replay. The music implementation is all temporary for the moment. There really isn't a great way to have 2 players on one keyboard without a num pad. I tried it and it basically had the players holding hands and hitting each other's keys.

Nice game I played it with my little sister and she liked it alot! She thought it was one of the funniest games she has ever played.

That's awesome! I'm glad she liked it and thank you both for playing.

Hey Vimlark i saw your one of your devlog videos, i also saw you use construct! im also a user of construct, and i was wondering if you wanted to do a co lab? also the games on my account and old ones so they dont look as good as some of my newer games so pls dont judge me lol. anyway i was hoping we could get in touch sometime ? 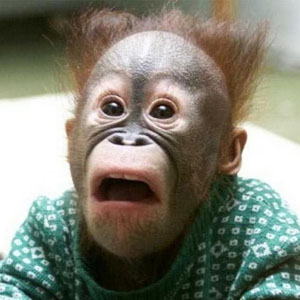 do you have a older sister?

Let me know if there are any issues. That's the only version I don't have a way to test myself at the moment.

Hi! Tried your game with a friend, and it's actually really funny! Gave me that super smash bros vibe! Nice art work too!

Have you considered participating in our GDWC #gamedev contest ?

Check out our itch.io page for more info :)

Thank you so much. That Smash feel was one of the original goals. I haven't thought about submitting to competitions or anything yet. I'll look into it.

oh wow the person who commented on rick henderson!!!

(that was a very good game and this is too!)

can you add 1 keyboard 2 player support ?

That is on the list. I am reworking most of the game's back end right now and player inputs with a keyboard option will be added.