Play the floor is lava in this 2D top down platformer.

Made for the Backeys Game Jam
Theme: It is not real

What is more not real than the lava in the floor is lava?

Due to time there is only 5 levels but there is a speed run mode that will track your best time to get through all the levels in a row.

I like the death mechanic. It makes the player walk back in shame after an unsuccessful jump.

i really enjoyed the game, i also love your videos, there is a slight flaw though, when playing on controller, it feels like you're running on ice.

This game is super fun! I just suck at it.

Love the game, also really like that sometimes when you land on the carpet next to objects you go under them. Im pretty sure thats a bug but its still cool

Fantastic game, love the new take on top down movement.

good game structure. The things to be working on is probably a way to communicate more with the player about how to play a normal tower defense game. I think the only other thing is to do touch ups on the rest of the game assets.

Thank you so much for playing, you are the first to do so. And thanks for the feedback!

this is great, I love it!

Glitch: In speedrun mode, if you pause using p, and resume with the spacebar, the timer stays paused. Got a time of 00:00:63 with it.

Cool game even though here's lava

That's awesome, difficult at the beginning, but then real fun and challanging!

The art is really cool but the jumping and turning just isn't there. Half the time I try to jump off a platform it just doesn't work, the other half of the time I can't turn to get the right angle. It might just be me, as I have a bad reaction time, but I feel like the character controls could use a bit of tweaking.

Really digging the menu format! What a cool way to introduce you to the gameplay AND show the credits and navigate around. I used a controller for the levels, which could feel a little slippery at times, but then again, so is climbing around on furniture, so it definitely reminded me of the "Floor is Lava" show in that aspect. One thing that felt maybe a little like a cheat for me was being able to "run" mid-jump, so you could start with a regular jump, toggle the run to go farther in midair, then toggle back.

But this is a lot of fun to play, and that's really the point. I giggled a bunch face-planting over couches and missing the smaller landing points by a millimeter. You never feel like the game is doing you wrong, though; you're in full control.

Was this a Construct 3 build? Just curious!

This is definitely a concept that could grow into a larger game -- more levels, moving obstacles, etc. Discovering the time attack mode after the first go-through was a nice addition! My time was not spectacular:

Expanding to a 2-player split-screen mode to compete against a friend would be pretty cool, too.

This was awesome! Each of the graphics, audio, gameplay, and concept are substantial and polished enough to make this game a super well-rounded and fun experience. Even with a team of talented developers, it's still impressive that you managed to pull this off in a week.

I'd love to see a procedurally-generated "endless mode" that tests you on how far you can go.

Very fun! Although I felt turning was a bit sluggish. And the hitboxes were a little too big in my opinion (specifically for circular platforms.) But overall this is really fun!

can you release the art files?

Haha this is so nice :D

but in the tutorial there is a type o

you wrote lave instead of lava

Great game for me 😊 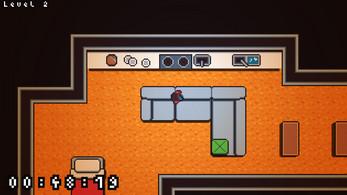 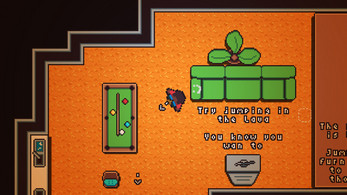